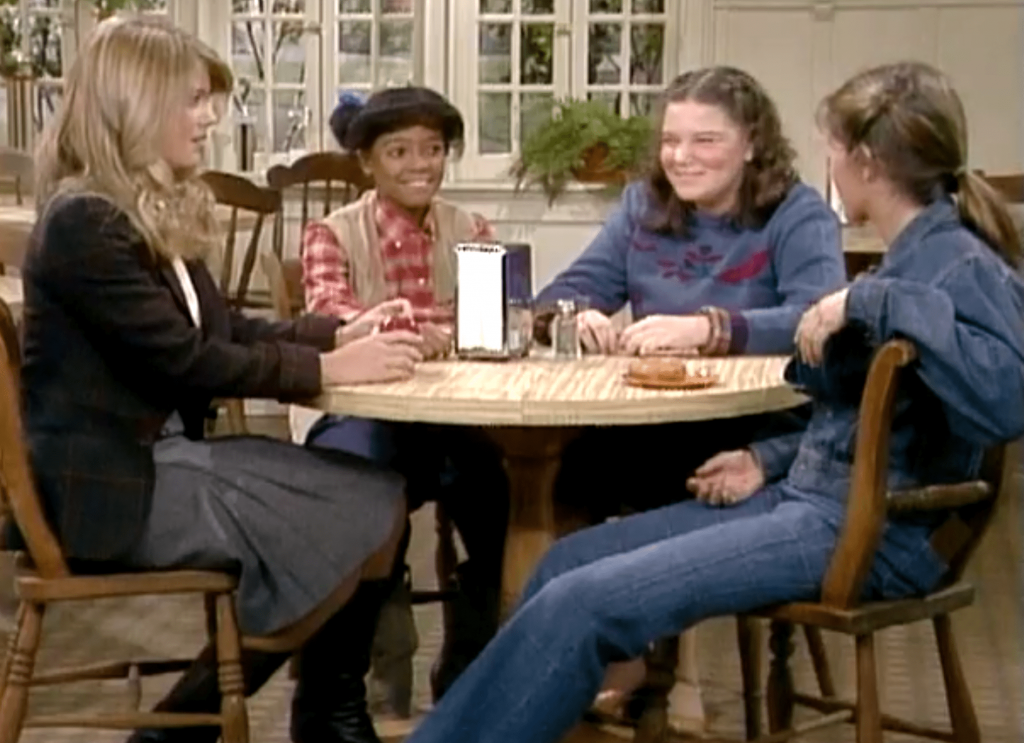 Jo was the “tomboy” character. She rode motorcycles, fixed cars and most importantly, believed she could pull men better than Blair, the rich, semi-snobby, but sweet character. Natalie was the chubby smart girl. Tootie was the youngest, an aspiring actress, and the only Black main character. Tootie’s mom, Diane Ramsey, was actually played by Chip Fields, Kim Fields real-life mother. She only appeared in two episodes. Chip also played Penny’s abusive mother in Good Times.

The two-part episode was a microcosm of the entire series. Jo and Blair’s fire and water relationship was the centerpiece through most of all nine seasons. Jo told Blair, “I’ll take the men and you can have their little brothers” in Part One of “The New Girl.” Blair responded, “there isn’t a man around who wouldn’t prefer a Rolls Royce to a motorbike.” So they put it to the test.

The four girls sneaked out of their dorms one night and took the school van (that Jo hot-wired to start) and went to the Chugalug bar to see which one could lure college guys. Jo also provided Blair a fake ID showing that she was 18 (the legal drinking age back then). Natalie and Tootie waited outside and watched through the window.

Tootie had the best line in the episode, considering she the “fast” 12-year-old in the show: “would you two stop yakin! Go in there and get some studs!” Doubt this will stay live on YouTube for very long, but here is Part 1. It skips right to the bar scene.

The girls end up getting arrested after a cop discovers their fake IDs. Natalie shoved the cop and Tootie dumped beer on his head. Part Two picks up with Mrs. Garrett using her influence to get the girls out of jail and instantly sentenced to probation. As a punishment they are all forced to live in a storage room back at Eastland and work off the restitution by working in the school cafeteria.

Jo packed her bags and almost left school. But Mrs. Garrett, in classic Mrs. G fashion, talked her down. It took until Season Three, Episode 16 for the girls to finally pay off their debt and be released from probation and their cafeteria duties. That episode provided the iconic paint fighting scene.

I was barely old enough to remember watching “The New Girl” episodes live. But I still have a cassette tape, recorded via my mom’s Radio Shack cassette recorder, with my dad yelling “ya’ll better get them dishes done” as “Chugalog” in a girl’s voice is heard in the background. So I just assume that I had to be watching the episode at that moment. But The Facts Of Life seemed to be a trial and error success.

The “Pilot Episode” of The Facts of Life was the Season One finale of Diff’rent Strokes, which aired May 4, 1979. Kimberly Drummond (Dana Plato) was a student at “East Lake” High School. Mrs. Garrett, who was of course the Drummond/Jackson housekeeper, went to school with Kimberly in that episode to help out in the dorm. She found her calling, if you will, in the episode.

Mrs. Garrett’s final episode of the Diff’rent Strokes was Season Two, Episode 13, December 5, 1979. Adelaide Brubaker (Nedra Volz) took over as the housekeeper in Diff’rent Strokes three episodes later. Mrs. Garrett kept her the character name for The Facts Of Life. Season One, Episode One aired August 24, 1979. The school name was changed to “Eastland.” Interestingly the episode centered around Blair accusing Cindy Webster (Julie Ann Haddock) of being a lesbian. Of course that would never be allowed these days.

Most people remember this intro for The Facts of Life.

But Season One had this intro.

Blair, Natalie and Tootie were featured in Season One, as was the aforementioned Cindy. Nancy Olsen (Felice Schachter), Molly Parker (Molly Ringwald) and Sue Ann Weaver (Julie Piekarski) were the other girls. A young Helen Hunt even made an appearance in the Season One finale entitled “Dope.” She was smoking weed in the Eastland dorms.

But the producers decided that seven girls was far too many. So they cut four of them, added Jo, and the rest if history.

Pretty much every kid in the 80s watched The Fact Of Life. Parents watched it with us. We watched the girls grow up as we were growing up. The show always taught life lessons, just like many other 80s TV shows. There will simply never be another decade like the 1980s with the wholesome, innovative and original greatness of music, movie and television content. And the best news is that all of The Facts of Life post-Season One cast, is still going great.

Of course the great Charlotte Rae passed away on August 5, 2018 at age 92. Kim Fields has been married for 14 years and is still acting. Nancy McKeon has been married for 18 years and was a main character in the CBS police drama The Division. Lisa Whelchel is still very devout in her Christian faith. She divorced after 24 years of marriage, and re-married in 2019. She was on Survivor and still looks almost exactly the same and still has that sweetie voice.

Mindy Cohn has a podcast called “Mondays with Mindy.” Lisa Whelchel was a guest on an episode this past May.

If you are under-30 parents, a great bonding activity with your kids would be watching The Facts Of Life episodes. There will never be anything like it again.