38 years ago today, “Total Eclipse of the Heart” by Bonnie Tyler was #1 on the Billboard Hot 100 for the fourth and final week

I implore every child to keep calendar journals starting right now. Because I couldn’t write these stories without my own journals from childhood.

1983 was a great year for me as an 8-year-old. I was making “good” money from my paper route (about $30/week) and another $5 to $10 per week from golf ball hunting/selling during the summer months. Sure I mostly bought Star Wars action figures, Legos and comic books (the first Transformers toys didn’t come out until 1984). But one of my paper route customers held a garage sale on July 8, 1983; and I bought a used walkman and a tape recorder. At the time, walkmans were still too expensive for an 8-year-old kid to buy brand new with his paper route money.

I, like many in the 80s, placed the microphone end of the tape recorder close to the TV speaker to record audio of music videos that I liked. Cassette were our MP3’s in the 80s. In the alternative, I’d wait for songs to play on the radio and record them from my dad’s boombox. But Night Tracks was perfect because it aired late on Friday nights and provided the best opportunity to record music from a 5-hour show without a bunch of background noise in the house. Good ‘ol analog tape issues.

By October, I’d gotten into the habit of recording every song (sans the commercials) on Night Tracks for as long as I could stay up. If I remember correctly the show started at 11 p.m. Central and ran until 4 or 5 in the morning. So sometimes I’d start recording, fall asleep, and would thus capture non-stop audio for however much space was left on the tape. My calendar journal from that year has a funny entry on Saturday, October 15:

“Accidentally recorded that Total Ellipse song last night. Didn’t like before. But now I do.”

It was, of course, referring to the Bonnie Tyler power ballad “Total Eclipse of the Heart.” But since I learned about omission “ellipsis” periods for sentences in my last month of second grade in May (thanks Mrs. Miller), I liked using my new word. I simply heard or just wanted to use “ellipse” and not “eclipse.” But the song is firmly entrenched in classic 80s history. 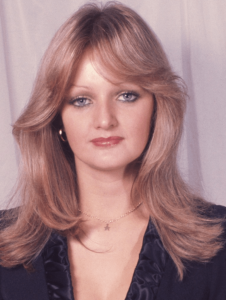 An 18-year-old young woman named Gaynor Hopkins dropped out of school and started working at a grocery store in Swansea, Wales (U.K.) in the late 1960s. At the same time, she was singing at local pubs three nights per week. She always loved listening to music as a child (sounds familiar) and believed she could be just as successful as those artists. Hopkins entered a talent contest in 1969 and finished second. That was her sign to fully pursue a music career.

Hopkins had a distinctively-raspy voice, a la Kim Carnes. Music executives in both Europe and the United States seemed to really like that in the 1970s and 1980s. Hopkins changed her name to Sherene Davis and became a backup singer for Bobby Wayne & The Dixies. By the mid-1970s, she was a backup singer for the U.K. soul group Imagination. Davis finally got her own record deal from RCA in 1976. That’s when she became Bonnie Tyler.

A few of her singles charted in Europe in the late 1970s, including “Lost in France” and “More Than A Lover.” But it wasn’t until her 1979 hit “It’s A Heartache” reached number-3 on the U.S. Billboard Hot 100 that she became a star beyond Europe.

From RCA to CBS

Tyler signed a contract with CBS/Columbia Records in 1981 after her contract with RCA expired. Her new songwriter, Jim Steinman, took her career to unprecedented heights. Steinman was best known for producing Meat Loaf’s 1977 “Bat Out of Hell” album that is by one estimate the fourth best-selling album of all-time. “Total Eclipse Of The Heart” was meant to be a vampire love song, according to Steinman.

I was trying to come up with a love song and I remembered I actually wrote that to be a vampire love song. Its original title was ‘Vampires in Love’ because I was working on a musical of `Nosferatu,’ the other great vampire story. If anyone listens to the lyrics, they’re really like vampire lines. It’s all about the darkness, the power of darkness and love’s place in dark. And so I figured ‘Who’s ever going to know; it’s Vienna!’ And then it was just hard to take it out.”

Despite the original intent, Tyler turned the song into a smash hit.

The song, at the time, was interpreted by most as a powerful, emotional plea from a woman who was going through a painful breakup with her husband or boyfriend. She wants him to “turn around,” come back to her, and remember all the good times and moments they shared. Otherwise her life will be nothing but perpetual sadness and heartache. I was too young to understand love at the time. But this is one of those songs you can “feel,” if you will, particularly in the days of embarrassing crushes on girls.

“Total Eclipse Of The Heart” was Tyler’s only song to reach #1 on the Billboard Hot 100. It first reached #1 on October 1, 1983, overtaking “Tell Her About It” by Billy Joel. “Total Eclipse” remained on top for four weeks, a huge feat considering the great songs at the time.

Kenny Rogers and Dolly Parton took the #1 spot with “Islands In The Stream” on October 29, 1983, dropping “Total Eclipse” to #2. Certainly no shame in losing the top spot to that classic, yet another great song about love. “Sail away with me, to another world; and we rely on each other, uh huh” is to this day, one of my favorite lyrics in a song.

But the classic hits just kept coming. Lionel Ritchie took the top spot over on November 12, 1983 with “All Night Long.” Ozone and Turbo from the Breakin’ movies are in the video.

“All Night Long” stayed number-1 until “Say, Say, Say” by Paul McCartney and Michael Jackson dethroned it on December 10, 1983. That song remained atop the charts for the rest of 1983.

“Total Eclipse” stayed on the charts for 29 total weeks. Of course it has been re-made god knows how many times. That awful Nicki French techno version hit number-2 on the Billboard Hot 100 on June 24, 1995. I’m sure there are more knock-offs, but they won’t be mentioned here.

Of course as Generation X ages, the people we grew up knowing are dying. Jim Steinman died this past April. Bonnie Tyler is still performing at age 70. She released her 18th studio album, “The Best Is Yet To Come” in March 2020. Tyler did an interview on the “BBC Breakfast” morning show in 2019.

Tyler has been married for 49 years. That’s also a feat in this world. “Total Eclipse Of The Heart” has so much meaning in my own life. From childhood to adulthood, it always triggers different emotions. Thank you Mr. Steinman and Mrs. Tyler for this all-time classic.