Kansas Shortcut Between Midwest and Southwest

The van is now approaching that 200,000 mile[stone]. Interstates are always best as far as speed limits, amenities (i.e. 24 hour rest areas, truck stops, etc.), lighting, smooth pavement and everything else that makes living on the road for months at a time more comfortable. But in most cases interstates are not the shortest route to your destination.

Those who have traveled a lot between the Midwest and Southwest (for me, Des Moines to Phoenix) have probably used the I-80 to I-25 in Denver route until you get to I-40. The scenery in Colorado, along with the atmosphere, is always worth the trip. But that route extends 1,600 miles. I decided to try the Kansas route that is only 1,410 and takes two less hours than the interstate/Colorado route. You also still avoid Texas entirely (albeit by only about 2.5 miles). 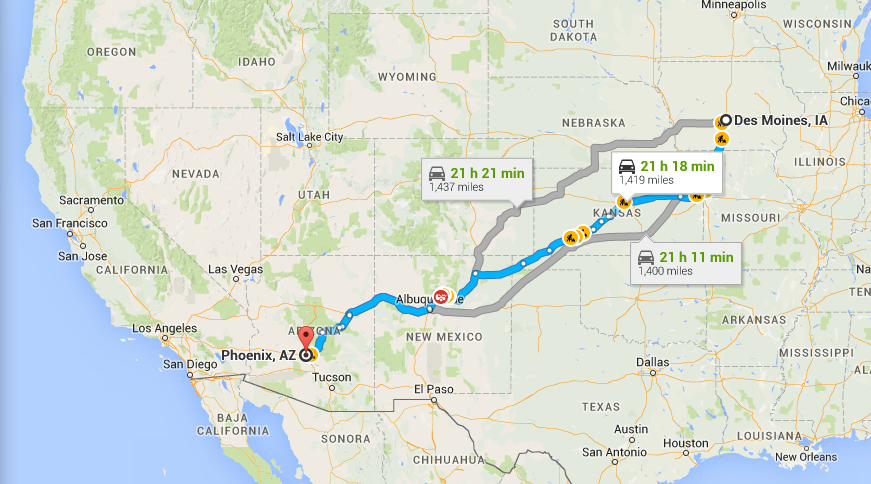 My van gets about 17 mpg on the highway, so that’s also a half tank of gas saved.

I left Des Moines via I-35 and arrived in Kansas City as scheduled. From there you get on I-70 westbound. I stopped at the Brown vs. Board of Education monument in Topeka. There’s a $2.70 toll to continue on the interstate beyond Topeka. There is a major military presence on this part of the drive. But the irony here is that anti-abortion and porn shop billboards kind of cancelled one another out as far as frequency. I also stopped in Manhattan (home of Kansas State University; about 10 miles off the interstate) and had a beer. I camped in Junction City at sunset.

The next morning I re-fueled and began to embark on the unknown. Exit 225 (Ellsworth/Great Bend) is where you get on Highway 156 and begin heading southwest on what appears to be a straight diagonal route. But that was not the case as you’ll see.

The first gas station is this one right off the interstate. 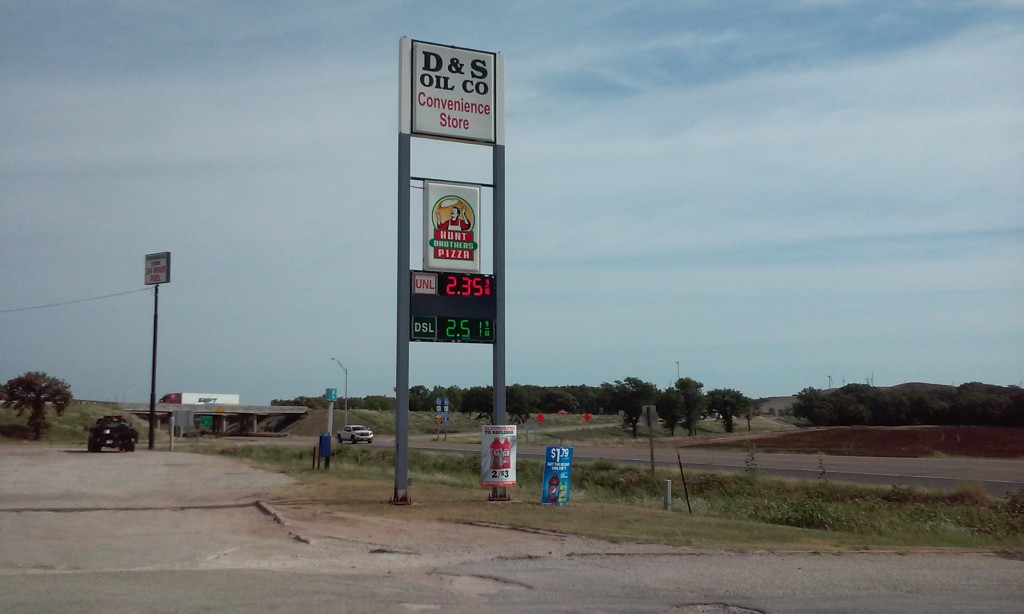 The road seemed to have received some TLC from the state, as there were several patches of fresh-looking black top that appeared to cover a lot of potholes. It was a smooth ride a vast majority of the trip. Ellsworth was the first “major” town on the route. There was a Walmart Neighborhood Market there. It was not a 24-hour store. The next town was called Holyrood, which is not even on the map in my road atlas. 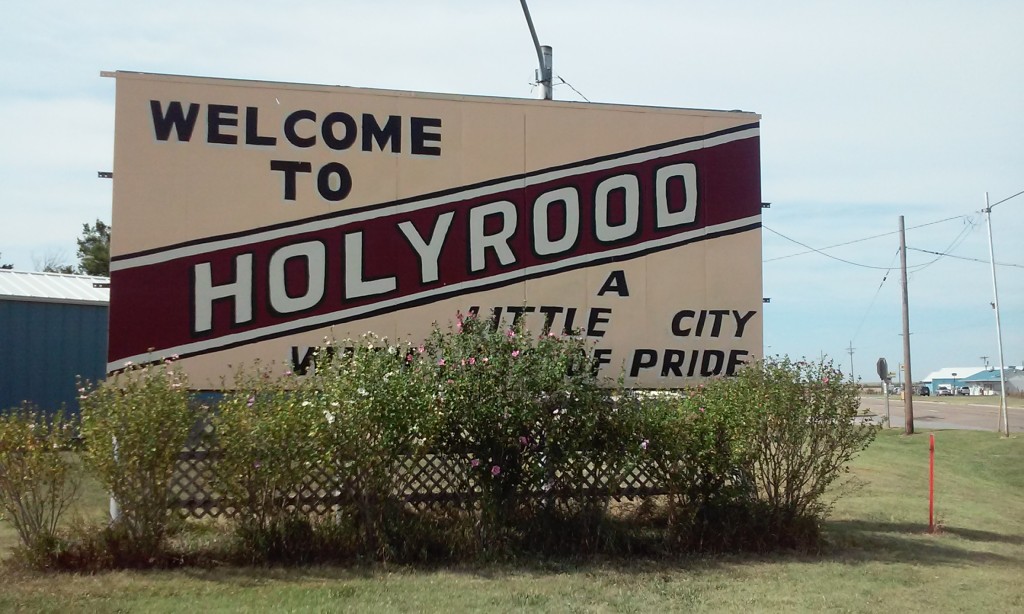 I later learned Holyrood Palace is where British monarchs stay when in Scotland. Had this bar been open I would have stopped for a beer and chatted it up with the locals. 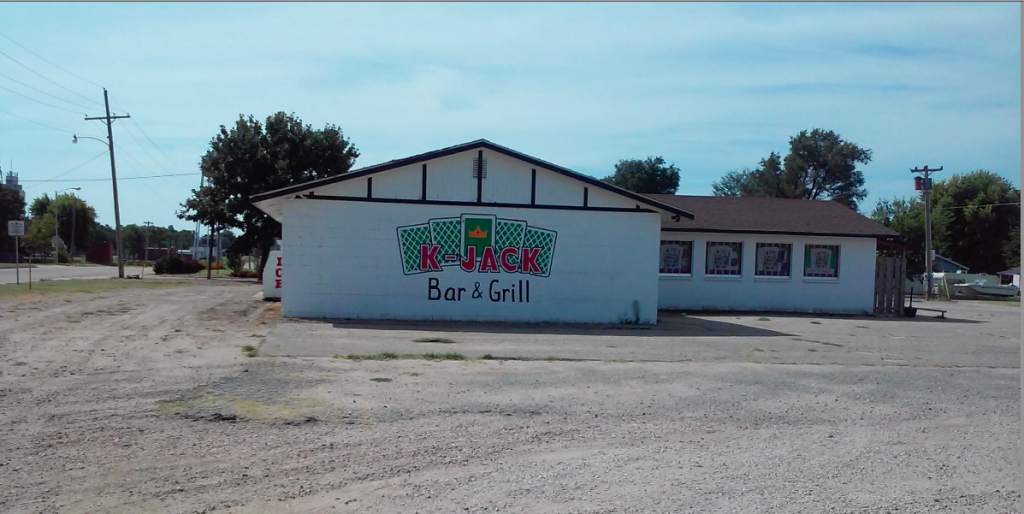 Great Bend is the next town; and first “big” town you passed through. It has the smallest Love’s Truck Stop I’ve ever seen.

It should probably think about re-branding to Circle K, as it felt more like a neighborhood convenience store than a travel stop. There’s a Walmart Super Center that appeared to be RV-friendly. I didn’t stop, but there were several vans and RVs parked there around noon. A 24-hour McDonald’s is down the street from there.

Once you exit Great Bend, the turnoff to stay on Highway 56 is marked only with a tiny green arrow that I missed in the daytime. I drove about two miles out of the way before finding a way to turn around.

The next town was Pawnee Rock. It was literally one of those “you blink, you miss it” town. But after seeing a dead skunk, the road kill count at this point was seven: two deer, three racoons, some armadillo-looking thing and the aforementioned skunk. The patches of fresh blacktop from I-70 to Great Bend on Highway 156/U.S. 56 indicated that local governments make attempts to keep the roads fairly smooth and passable. But the combination of small directional signs and animal activity make it hard to recommend this route at night if you’re unfamiliar.

Larned is the next town. Of course I thought it had a funny name. But it was pretty cool to see a Shopko there since I hadn’t seen one in over a decade. 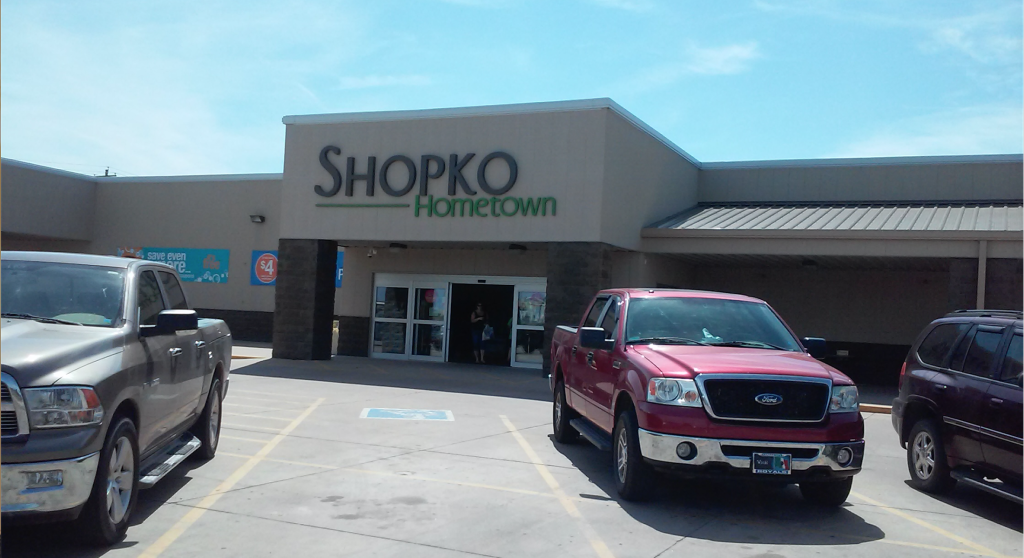 The company has survived the Walmart, small town supermarket monopoly/takeover across America, despite closing at least 14 stores this year. But from what I understand from people who have worked at Shopko, its still a corporation. They treat employees like Walmart does with low pay and long hours. That’s a conversation for another time. Larned has several other small businesses that epitomize Midwest culture however. 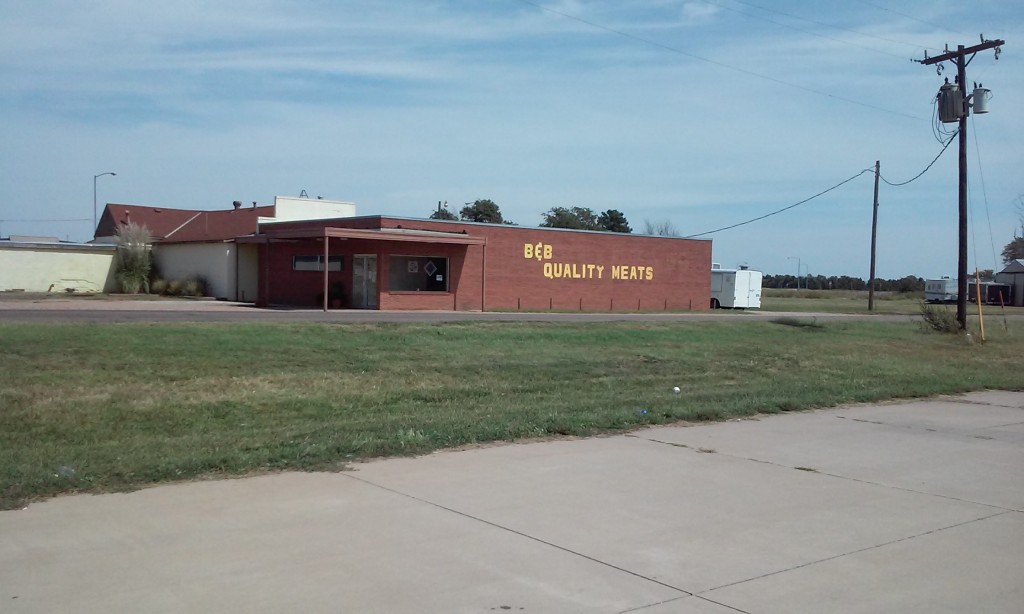 When you get to Kinsley, again pay close attention to where you’re going. U.S. Highways 50, 56 and 183 all intersect here. The previous two run concurrently until you get to Dodge City.

Yes that’s the same Dodge City Clark Griswold took the family in National Lampoons Vacation, and the original “Dodge” in the old adage “get the hell (or f***) out of Dodge.”

I’d already been driving for well over five hours with all the stops, so I didn’t spend much time here. But the town did seem to play to the Old West theme. 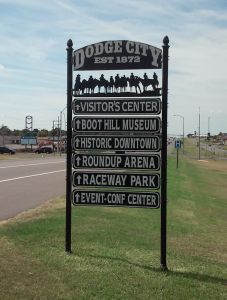 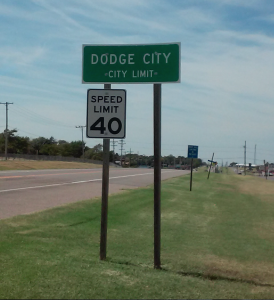 Dodge City is another one of those places where you need to pay close attention to the road signs. U.S. Highways 50, 56, 283 and 400 all intersect here. This time I only drove about a half mile out of the way before realizing I was going the wrong way. Once you get on Highway 56 from here, its straight-away with no more freeway-like interchanges.

The most obvious, and interesting, sight you see continuously for the next 20-30 miles are seas of wind turbines.

I believe the above photo is the part of the Gray County Wind Farm. Kansas is one of the top three potential wind power states in the country and it appears they’re trying to taking full advantage of it.

I was really tired at this point and wasn’t stopping anymore until I either could not stay alert or got to New Mexico. 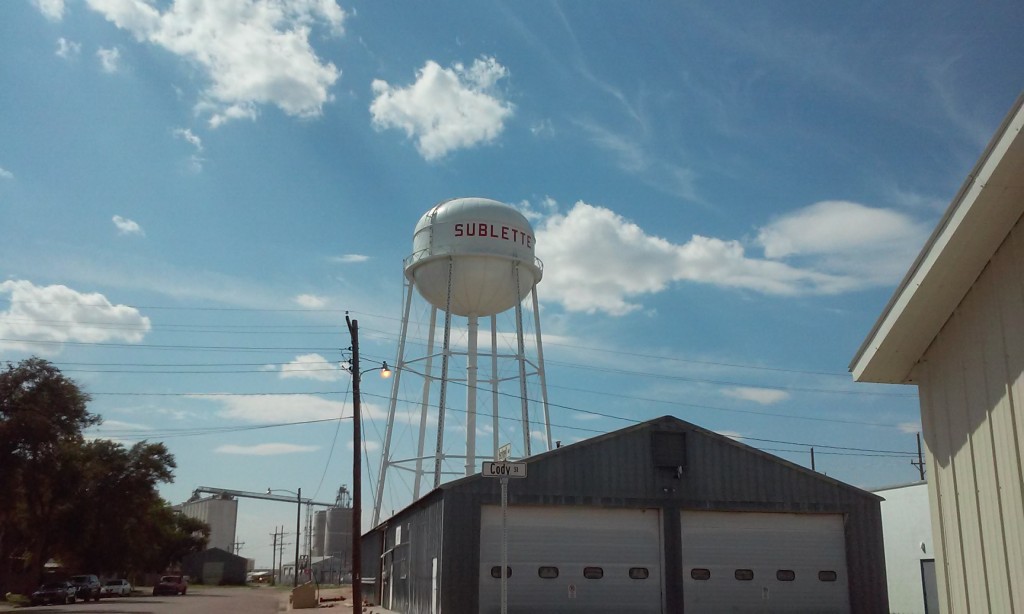 I made it to Elkhart, the final town in Kansas before you hit the panhandle of Soonerland. 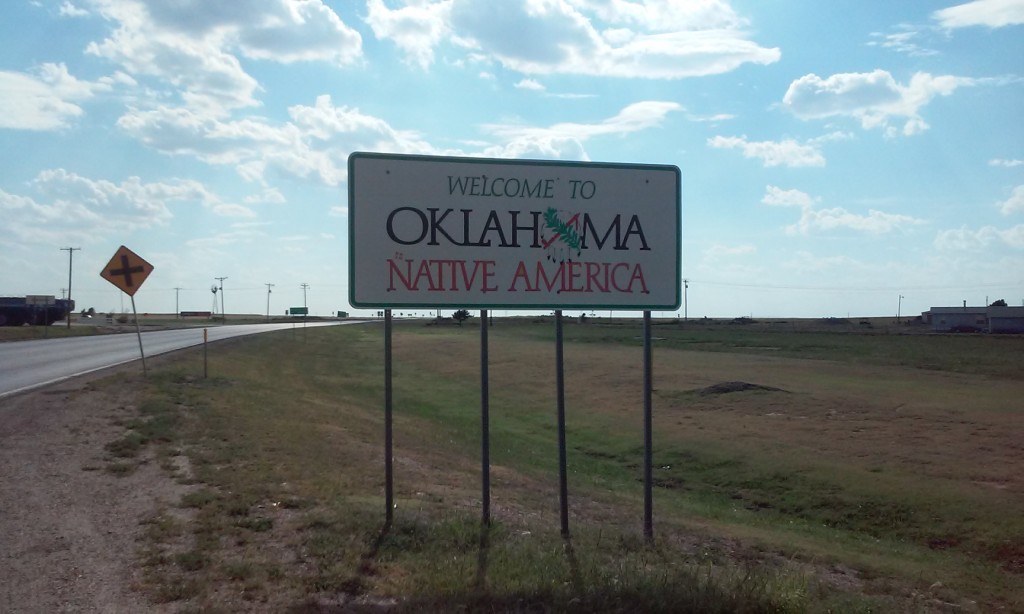 The furthest I could make it thereafter without seeing spots was the Love’s Travel Stop in Boise City. Of course the inverter batteries in my van decided to die on this day (owned them only 18 months; poor maintenance; lesson learned) so it was a generator night at a Love’s that wasn’t necessary a “truck stop.”

The rest of the trip the following morning consisted of about three more hours of two-lane highway driving before reaching Interstate 25 in New Mexico. The rest of the routes to most major destinations down here (Albuquerque, Phoenix, San Diego, Los Angeles and Las Vegas [New Mexico, not Nevada]) are all interstate.

Once again, this route takes about 21 hours and 1,400 miles from Des Moines to Phoenix. The I-80 West to Denver, to I-25 South to Albuquerque, to I-40 West to Flagstaff and I-17 south to Phoenix is 1,600 miles and 23 hours. If nothing else, do it just so you can say you’ve been through the heart of the Heartland.