The four days spent in Cheyenne, Wyoming were completely spontaneous (like much my entire life) after pretty much being forced to stay by the locals.

It just so happen to be the time of year for the town’s annual Frontier Days, which was described as the largest rodeo in the world by several individuals there. Now I truly understand the saying “this isn’t my first rodeo.” No matter how many of those things you see depicted in cartoons and television shows, there’s absolutely nothing like seeing one in person…for numerous reasons that are not the subject of this article. Despite the fact some moron backed into my generator and ripped up its outer casing at a truck stop in Cheyenne, Frontier Days was pretty awesome…and pretty country!

The total travel time from Cheyenne to Cody, Wyoming was about eight hours, but several stops were made. The drive between the towns of Shoshone and Thermopolis might be the most breathtaking, enchanting scenery I’ve seen with my own eyes not only on this extended trip, but in my entire life. There were several instances where the van almost flew off the side of the mountains as my eyes were fixated on the clear waters, trees, and natural beauty Wyoming has so much of.

Cody had everything as far as supplies before venturing into Yellowstone. The Wal-Mart there served as a camping spot for three straight nights without issue.  Even went to a local bar and yet another rodeo during my stay here.

The drive from Cody to Yellowstone was less than an hour. A one calendar year pass to all National Parks was $80. As soon as I entered the park through the East Entrance, there was a major traffic jam. At first I thought this was no different from a big city. But traffic was slow because several people pulled over, got out their cameras, and were snapping pictures of a family of bears off in the distance. That…was pretty cool to see, especially after being in the park for only about five minutes.

The first “civilization” area you get to is the Fishing Bridge and Visitor Center. My fishing license ($15 for a week I think) was purchased here, as were these lures the shop guy said were the third-best he had for catching trout. The best two types were sold out. I parked the van in the Visitor Center lot, started the generator to charge the inverter batteries, and walked to Yellowstone Lake. I caught nothing in three hours.

Fatigue started setting in, so the next thing to figure out was where to park and camp. I didn’t really feel like playing cat-and-mouse, searching for a spot. So I ask the ranger at the Visitor Center where I could park. She turned out to be a sweetheart. She called her friend at the shower and laundry facility up the street which I was going to use in the morning anyway. I drove over there, went inside, and a pass to park my van in the RV lot for the night was waiting for me…free of charge. Good thing I grabbed some extra propane tanks in Cody. It got pretty chilly that night for it being July (like into the high 30s). Mr. Heater saved the night.

The next morning was shower and laundry time. The best thing about Yellowstone showers: they cost $3.50 or less. The bad news, they are crammed and not very private (you can hear a dude hawking up a loogie in the background of the video below). Its best to use them as early in the morning as possible to avoid the crowds, especially during this peak season.

Laundry was ridiculously expensive to do: $2.50 per load to wash, $2.00 to dry. But then again everything was overpriced in the park. Gas was well over $4.00 per gallon. I went back to the Fishing Bridge Visitor Center and fired up the propane hot plate and made some eggs. A curious visitor wanted a “bird’s eye view” of my simple meal. Keep in mind, this camera does not have a zoom lens. The wing of this raven grazed my ear as it flew by.

After my “brush” with nature, I headed towards West Thumb and Grant Village. Of course traffic was slowed by people wanting to catch a glimpse of nature. I had to get out and take a shot of this guy. 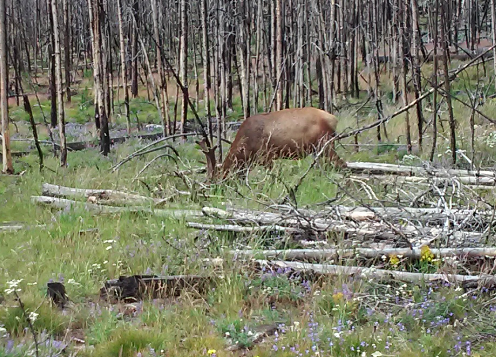 Finally got to see hot springs in the Park for the first time. “Fascinating” is the best one-word description for them.

Now came the tricky part of the day: finding a place to camp and park. But it ended up being pretty easy. Despite the cargo rack on the back, the van still has stealth value. I parked on the side of the road outside a Grant Village campground. No problems at all. Don’t believe the hype about Verizon hot spots working well at Yellowstone. Between midnight and 7:30 a.m., there’s a reasonably decent enough 3G signal to get some work done. The Virgin Mobile (Clear.com) hot spot got no signal at all. But you definitely don’t want to rely on this if you need internet for work or anything else that’s important.

Most of the lodges at Yellowstone sell internet access. You might as well buy the 3 day, $25 package (as opposed to $12 for 24 hours of access) if you’re going to need internet for anything important. It works at most of the hotels throughout the Park and is pretty fast.

I made sure to spend about a half hour on my shower at Grant Village. It is the last spot (without backtracking) for miles that has public facilities, so I just assumed no shower for at least two days. Next decision was to head south to Grand Teton National Park (about 25-30 miles) or take the 15 minute drive to Old Faithful. There is a large area of land called the John Rockefeller Parkway that is between the Yellowstone south entrance and Grand Teton. That helped make the decision…I’ll see Grand Teton some other time when I don’t have to enter through Rockefeller Parkway.

As you get closer to Old Faithful, traffic starts to get more congested. I got lucky and found a parking spot outside the Old Faithful Inn as someone was pulling out. The geyser itself was “scheduled” to erupt at 2:44 p.m., give or take 10 minutes. I thought it’d be far more noisy and animated than this, but awesome nonetheless. The human emotion puts the cherry on top.

It was pretty easy to blend in at the Old Faithful Inn parking lot for a camping spot. I slept there two nights without issue. Between the random animals and numerous hot springs, its difficult to say what is the most fascinating part of Yellowstone. The latter are far easier to photograph with a phone camera though. 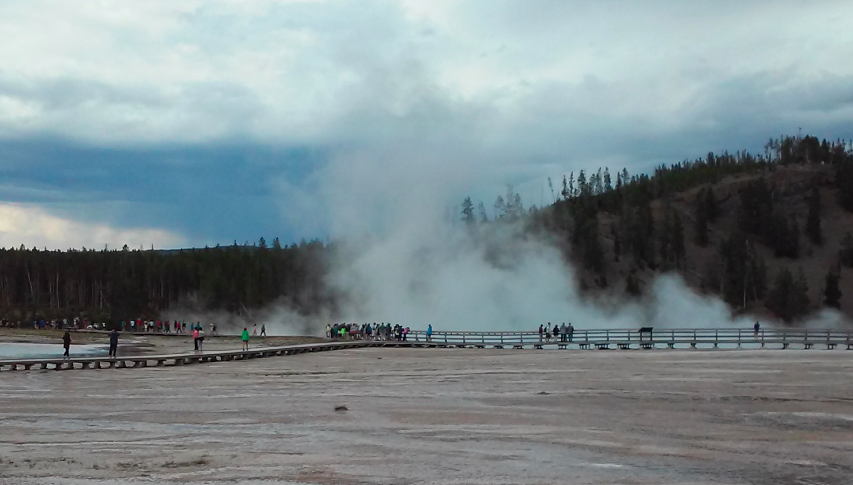 It was pretty disappointing not seeing a buffalo at all during the entire trip. It was a fitting close to the trip seeing one casually walking down the side of the road about five miles from the West Entrance. I’ll be back at Yellowstone sooner rather than later. There’s just so much to see and do everyday.

Its about that time of year where the permanent van dweller has to start heading south. September can bring snow and ice storms to this area of Wyoming and Montana. Driving the van in snow is not fun. But seeing Montana, Idaho, and Washington before winter was a learning experience. More on those places later. 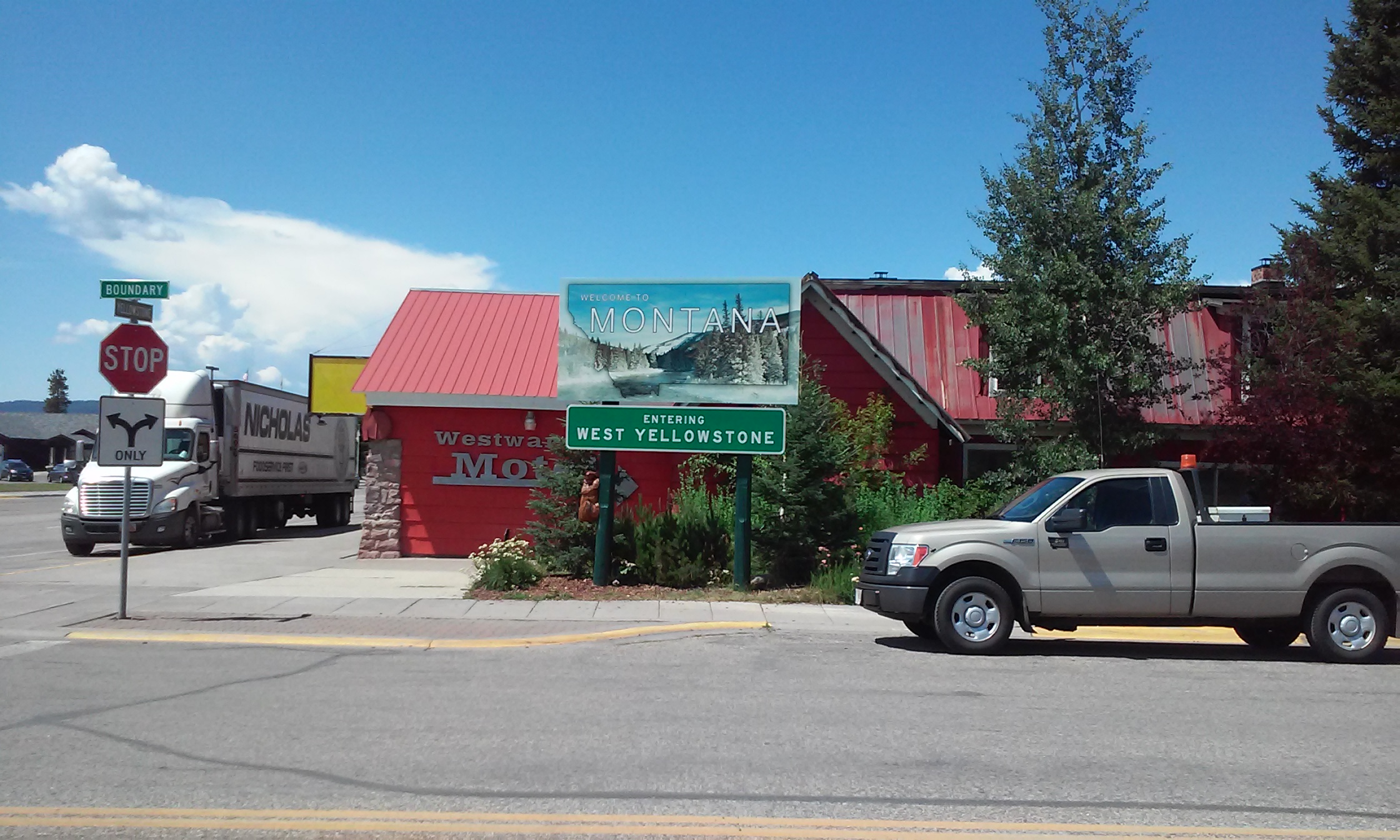