The definition of co-creation is simple to decipher in its face. Co-creation, like it sounds, is collective creativity between two or more people in a collaborative space. Those people can include business stakeholders, trained professionals in various disciplines, consumers or members of communities.

A 2009 white paper by market advisory firm Frontier Strategy Group defined five guiding principles of successful co-creation: inspire participation, select the very best, connect creative minds, share results, and continue development. There are many examples from as far back as the 17th century in the United States that fit these parameters. But it’s only been in the past couple decades that co-creation as a concept in business and mainstream vernacular started picking up steam.

When discussing the origins of co-creation, the conversation typically gravitates toward early forms of banking. The first paper money ever used in the United States, known as colonial scrip, could be considered a product of co-creation. The Colonies printed their own debt-free currency throughout much of the 18th century. It was valued by nothing but the faith in, and collaboration of, the people. In other words, the Colonists formed their own loosely-knitted bank and currency. 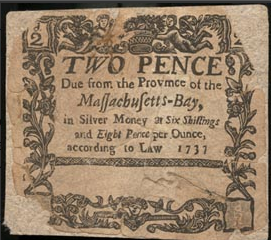 This interest-free, community-backed money made the colonies very wealthy and prosperous (of course being a slave state didn’t hurt either). But this “people’s money” was detrimental to the British Crown. Parliament enacted the Currency Act of 1764 and abolished all money not based on the pound sterling. The Revolutionary War was in fact fought because the Colonists did not want to use a foreign currency that could be artificially manipulated at any time by government. Though history books say we won, the Federal Reserve Note says we lost.

Credit Agricole, a French collective of banks created as a result of the country’s Trade Union Act of 1884, is an early example of co-creation in Europe. Francis Gouillart, founder of consulting firm Experience Co-Creation Partnership, described how poor farmers in France started lending money to one another because banks ignored them. There was no opportunity for bankers to earn significant interest from farmers with little wealth.

Local farmers created a simple rating systems to determine credit worthiness. Basically they had a good chance of obtaining the money they needed as long as they weren’t drunk when applying for funds. Though the co-creation aspect of Credit Agricole has been phased out over the decades, its now one of the largest banks on the planet, generating about €26.4 billion ($30 billion) annually.

A query in Google Books Ngram Viewer, an online tool that charts the frequency of word use in published books and studies, found that the term “co-creation” was used for the first time in English language texts in 1908. But co-creation, and the variant cocreation, were not used with any frequency until the mid-1980s.

Since that time co-creation has become a common strategic business model in several industries and disciplines. Open-source programming platforms and applications like Linux and Mozilla Firefox, are some of the best known examples of co-creation that the general public can relate too.

Many companies have embraced co-creation in their own ways to further brand awareness and engage customers like never before. Those Coca-Cola Freestyle machines you see in fast-food restaurants and convenience stores, and the corresponding mobile app, allow users to create their own drinks by mixing various Coke products. The “new drink” can then be named and shared with the world. Joe Tripodi, chief marketing officer for Coca-Cola, told Forbes the initiative was put in place to win over tech-savvy Millennials.

Burberry uses co-creation in the more traditional sense. The Harvard Business Review chronicled how the company partnered with Salesforce.com to create a portal that allows customers and employees to interact and share ideas. The social platform, known as Chatter, acts as both a customer relationship management (CRM) system and a social media aggregation tool for registered customers. Buddy Media, the firm’s sharing platform, allows customers to suggest designs, remotely attend fashion shows, and provides the company a way to test new ideas before bringing them to full production.

Phoenix-based Local Motors had the Internet buzzing for weeks after it printed a car right on the floor of the 2015 North American International Auto Show in Detroit this past January.

Local Motors CEO Jay Rogers says co-creation is the key to mass producing a 3D-printed car for the masses. He told Ideas Lab in March that bringing together a community of innovators across the globe through co-creation was impossible 10 years ago. But tools that allow collaboration are now widely available and have changed the auto manufacturing game. 3D printing allows designers to develop strength and weight-optimized parts, while vastly reducing production times.

Co-creation bridges barriers between the corporate sector and the consumers who buy and promote their products. Its the business model of 21st century, particularly in today’s social media and web-driven world. But co-creation also helps build strong communities. Be it neighborhood watch programs or neighbors producing products and services for trade amongst one another, co-creation cuts out big government and unnecessary, tyrannical regulations that stifle innovation, partnerships and most importantly, liberty.